Microsoft Word has long had the option of displaying the page margins as "text boundaries." Here is a screenshot from Word 97 with them displayed and with the option dialog that turns display on or off:

Note that the Horizontal and Vertical Rulers also display the margins, but this is not quite as intuitive for many users. Here are two screenshots of the same document in Word 2010 with Text Boundaries displayed and not displayed:

Many Word users use this feature to tell them, at a glance, where their page margins are. Shauna Kelly recommended turning them on in her beginner's tutorial. Personally, I found them distracting and simply used the Rulers.

However, the designers at Microsoft were apparently unaware that these dotted lines were even being used for this purpose and changed their text layout engine in Word. This changed the display of these dotted lines to a paragraph boundary rather than a page boundary. There is no way to change this display in Word 2013-2019/365 and it is highly unlikely that it will be changed back.

As reported by Suzanne Barnhill and others, Microsoft's take on this is that text boundaries are "a feature that was never supposed to be a feature," "a window into the internals of word" that should probably never have been exposed to users.

The feature "just draws a border around [Word's] internal drawing rectangles," and those have now changed with the switch to a hardware-accelerated display. So Word "is doing precisely what it has always done (drawing borders around internal data structures). Unfortunately, this means that scenarios that used to work accidentally now don’t work the same way. There’s really no way to bring back the old functionality – it truly doesn’t exist."

If the document in Word 2013 is opened in compatibility mode to any earlier version of Word the boundaries revert to the previous display. This does not work, though, in Word 2019 or later. For those interested, here is a link to a lengthy discussion of this change with workarounds:
http://answers.microsoft.com/en-us/office/forum/office_2013_release-word/how-to-expand-text-boundaries-in-word-2013/bac7738a-7566-4b23-9fb8-d3156fca2c3b?page=1&tm=1395665485247 (The forum just displays the one response marked as an answer. Expand this to show all the responses and the full discussion.)

For sample templates that have two of the discussed workarounds for Word 2013-2021/365 see my Downloads Page.

If you feel that Microsoft should change these back, here is a page where you can let them know. (It has been "under consideration" since 2015.) More votes won't hurt.

How to Get Rid of Them!

It depends on which version of Word you are using.

Word for the Mac

Images from Philip Jones' post on the Microsoft Answers Forum. 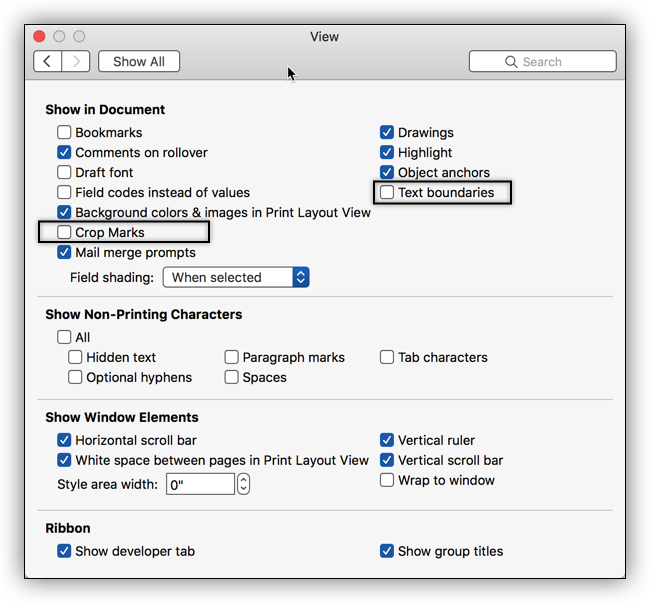 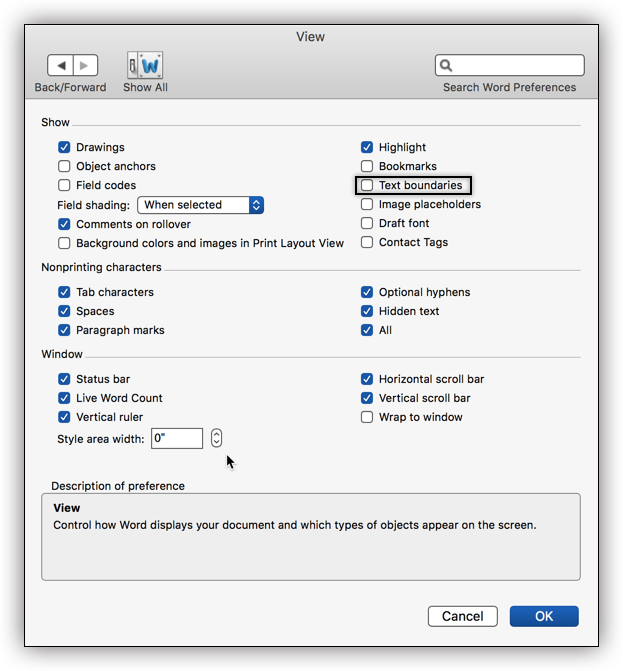 Changes / suggestions / ideas can be sent to Charles Kenyon.

Many people visit this site and use the information it contains.
It costs money to keep on line and effort to update.
If you have received assistance here
please consider making a donation if you can.

FAQ provided as an adjunct / hobby as a part of my web site as a criminal defense lawyer.